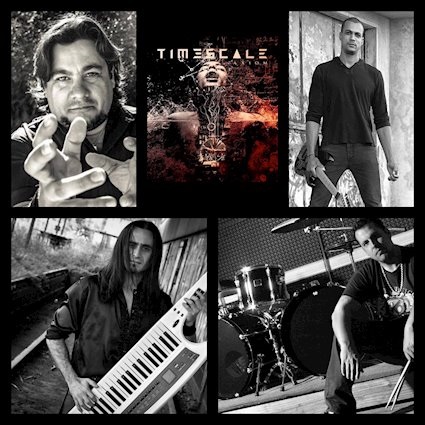 “Axiom” is the first studio album by Timescale, which includes various styles of rock music such as classic, heavy metal and melodic power metal. The CD features the diverse musical experience of the band’s international members, representing Europe (Portugal), North America (California) and South America (Argentina). At its core, the tracks and themes within this album represent the bi-polarization of humanity, and it serves as the band’s statement and call to arms for the world to wake up and fight for what is good on Earth.Timescale is a new power metal band with a powerful sound that combines various styles of rock music including classic, heavy metal and melodic power metal.The word timescale in its literal form means “the time allowed for or taken by a process or sequence of events.” The genesis of our name and what we represent reflects that very ideology. The notion of time – time for healing, growing, feeling, thriving – and the progression of the emotions that arise as a result of time elapsed.While the group started as a project between musical artists and friends in 2019, the projects have since expanded once the group became more and more enthusiastic about the music they were creating.There is a certain level of sentiment and purpose to every music Timescale produces. For example, the band’s first EP, “Fortress of the Mind,” evokes inspiration as it touches on overcoming hardship and arising from the deep shallows to find light and hope. The band then evolved this storyline by extending the EP to a full album, “Axiom,” which launched this year.The word Axiom is a concept that comes from the Greek word axíoma, whose meaning very closely expresses the themes covered in this CD. At its core, this album represents the bi-polarization of humanity. Today's real-time societal affairs are proving that our world and humanity are being destroyed because our people are being deprived of their right to fight for what they believe. The album is our statement and call to arms for the world to wake up and fight for what is good on Earth, before it is too late.The California-based band has four band members, all professional musicians with both in-studio and live performance experience, that represent several different regions, including Europe, South America and the U.S.Lead Vocalist, Leonel Silva: Worked with various bands: Negacy, Fantasy Opus, Hourswill and others.Keyboardist, Ari Perchuk: Member of Kenziner, Passion & The Opera, Sons of Sion and others.Drummer, Nicolas Humeniuk: Freelance drummer for various bands.Guitarist, Cleiton Modesto: Worked with various bands: Mind Feeder, Castle Mountain and other freelance projects.You can learn more about Timescale on the band’s respective social channels, and also check out its music on all major platforms such as Bandcamp, Deezer, iTunes, Spotify and more.Band Line-Up:Cleiton Modesto - GuitarsLeonel Silva - VocalsNicolas Humeniuk - DrumsAriel Perchuk - Keys
CD Track Listing:1. Edge of the Storm2. Come With Me3. Only the Fools4. What They Say5. Leave it All Behind6. Creeps7. Still Alive8. Queen of Nevermore9. Mother EarthWeb and Social Media Links:https://www.facebook.com/TimescaleBand/ https://www.instagram.com/timescaleband/?hl=en https://www.youtube.com/channel/UCYjI3bb2i9k792sSV4lmrpw https://timescaleband.bandcamp.com/ https://open.spotify.com/artist/48ZLx7EVGro1BU5bMlvnL0