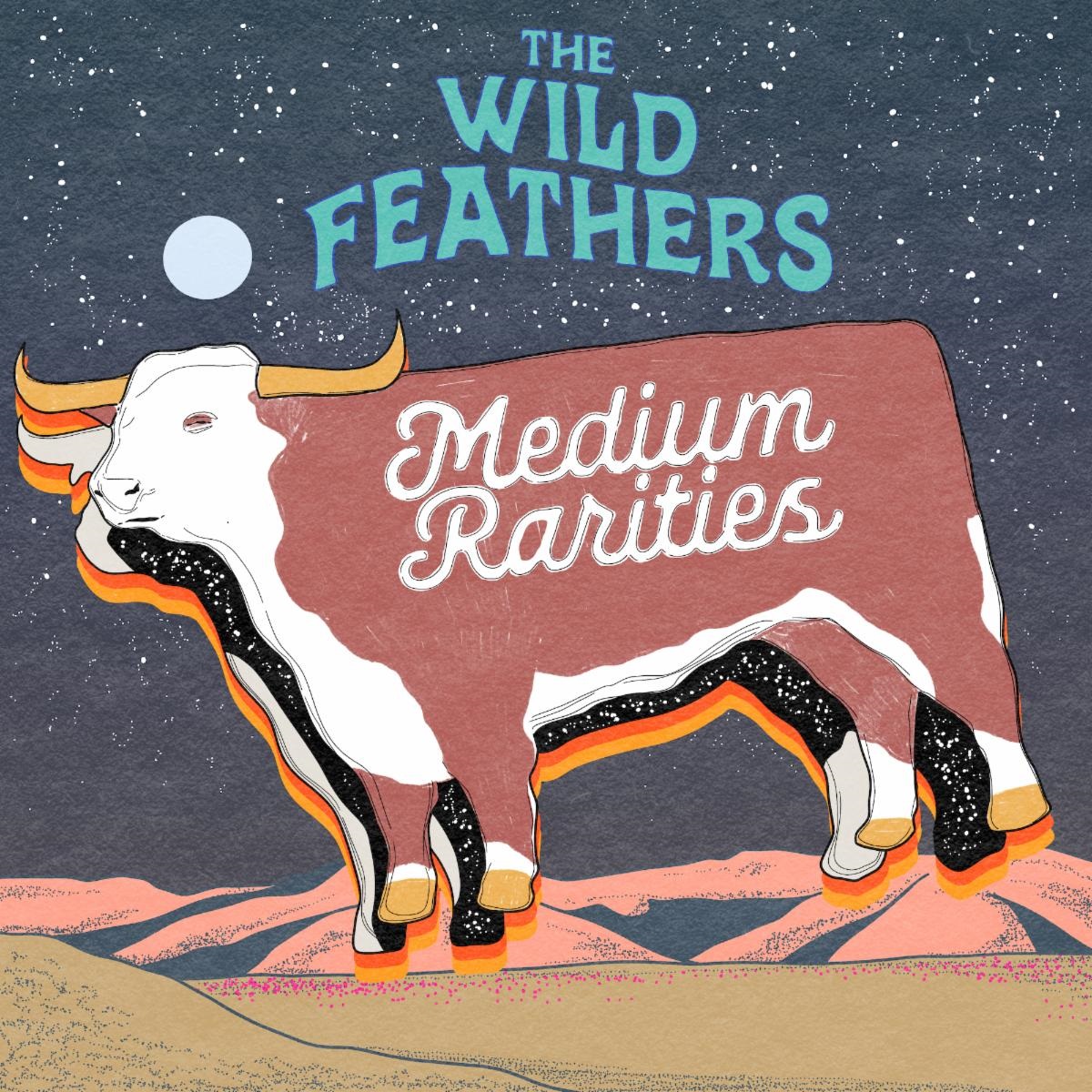 In early 2020, just weeks before pandemic swept the globe, The Wild Feathers were kicking off a brand new chapter—fully independent, no more label contract or team, soaring free of the weight of the industry on their backs. Then, the universe pulled the ripcord. When their major tour with Blackberry Smoke was canceled in March, the band—Ricky Young, Joel King, Taylor Burns, Ben Dumas, and Brett Moore—found themselves with unexpected time to reflect on their career so far. Medium Rarities, a brand-new full-length album of unreleased songs spanning the band’s decade-long career, is what came from those reflections. King, whom Dumas dubs the band's “archive master,” started poking around hard drives of old music, and the idea of a rarities compilation began to take shape. The album, released today, is composed of those B-sides, covers, demos, and other nuggets King and the band culled from The Wild Feathers’ vault. Ahead of its release, Medium Rarities garnered critical praise—from Garden & Gun, who praised the band’s “unique blend of country, Southern rock, Americana, and roots–centric pop,” to WMOT, who’ve been there along each step of the Wild Feathers’ journey, to The Bluegrass Situation’s exclusive album preview. American Songwriter gave the album 4.5/5 stars, saying, “With the well done Medium Rarities, the Wild Feathers prove that they’re absolutely on track...it boasts some of the best recorded performances of their entire career.” Medium Rarities can be now purchased or streamed now at this link. A vinyl pressing of Medium Rarities is available exclusively through Magnolia Record Club.
Tonight, November 20th at 8pm Central, The Wild Feathers will take the stage at Nashville’s new Brooklyn Bowl venue to celebrate the release of Medium Rarities. Through a special live stream on fans.live, the show will be streamed worldwide for a pay-what-you-want ticket price. More information, including ticket options, can be found at this link.
Medium Rarities opens with “Blue,” a Dave Cobb produced cover of the Jayhawks’ classic from Tomorrow the Green Grass, The Wild Feathers’ version of “Blue” sticks close to the original but with the band’s signature harmonies—reminiscent of The Band or Tom Petty and the Heartbreakers—expanding beyond the existing vocal melody. “I can’t remember not being in love with the Jayhawks,” says Young. “Melody is by far the first thing that draws me to a song and they just can’t help but pull you in and it’s just effortless.” This song is the first on Medium Rarities not just because it’s a rock and roll kick-off for the ages, but because the album is sequenced chronologically and “Blue” was recorded near the very beginning when the band was looking for a record deal. “Interscope wanted to hear what we could do harmony wise and we thought that song would be the perfect example of what we thought we were capable of,” remembers Young.
“Fire,” “Goodnight,” and “My Truth” round out the middle of the compilation. All three tracks are new material written in the lead-up to the band’s plans to explore a new era of the Wild Feathers. “Fire,” in particular, shows the group's sonic growth with its understated verse arrangement, sparkling production, and arena-ready chorus. The harmony-drenched “My Truth” has its roots in a recent writing retreat the band took together, and the song's lyrics (“I've been looking for the answers / I can't find them on the news”) connect a personal relationship to current events. Unlike the rest of the songs, produced by the likes of Dave Cobb and Jay Joyce, the Wild Feathers produced these new tracks together as a band.
Standout b-side “Marie” is a laid-back front-porch rocker about a songwriter who doesn’t have much or all that he promised, and his songs are all that he may leave behind; its vulnerable lyrics are punctuated with chiming acoustic guitar and twangy electric riffs. Young wrote “Marie" during sessions for the band's self-titled debut album, and admitted to being surprised that the song didn't make the final tracklist. “It's one of my favorites," he says. “I'll always play it if I do a solo show or anything like that. I'm really glad it's made it onto this record.”
“Medium Rarities opens up the possibility for future volumes,” Young says. “We thought it was a cool thing to do for ourselves, and especially for our fans. We’ve always been one of those bands that talks about having a true catalog, by every definition: live albums, box sets, double albums, b-sides, and rarities albums—being music fans, and that’s what we are, that’s what you want from artists you like. You want anything you can get your hands on. This is one more step we’ve accomplished.”
Medium Rarities Tracklisting:
1. Blue
2. Heartbreak
3. Marie
4. Almost Cut My Hair
5. Fire
6. Goodnight
7. My Truth
8. To Be Gone
9. Lose Yourself
10. Guitar Man
11. After the Bottle’s Gone
The Wild Feathers will finish out 2020 with a handful of live-streaming concerts and private events, including public dates with Blackberry Smoke as well as a handful of headline shows of their own. They're currently at work on material for a new album and plan to release new music in early 2021.