Marcus King Trio Announce Live At The Drive In Shows 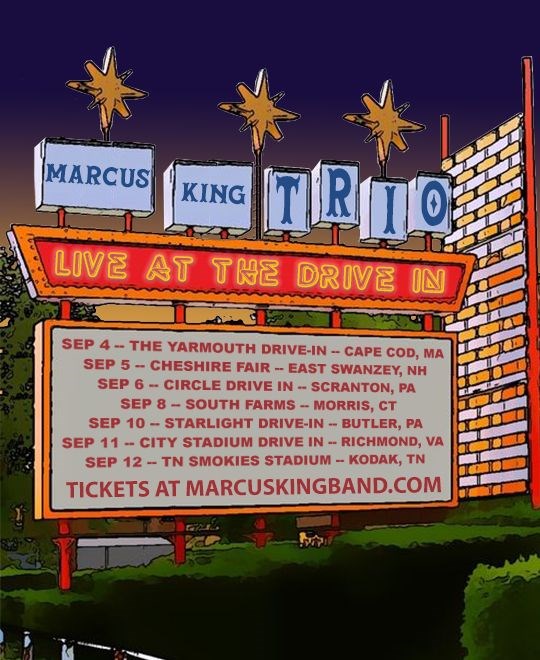 Discussing the event recently with Pollstar Magazine, King stated, “The idea to do four shows came about because I wanted to give people some variety. If we’re playing a three- or four-night run, we don’t like to repeat material or recycle anything.” He added, “We are supporting MusicCares and helping musicians in these trying times because they’ve been a success and musicians are getting hit pretty hard not getting to do what we love.”

The series took place over four weeks every Monday July 13 - August 3 and included notable musical guests such as Billy Strings, Brent Hinds from Mastodon, Jennifer Hartswick, Devon Gilfillian as well as singer-songwriter Early James. The event received widespread media acclaim from tastemaker media such as Rolling Stone who praised the last performance of the series who stated, “With a cast of Nashville musicians like Devon Gilfillian and Early James, the singer-guitarist breathes new life into the Band’s warhorse.” The event was held in a safe and socially distant production space in Nashville and on-demand viewing of the performances ended yesterday. Watch performance clips including “Say You Will” here and “Honey” here.

King also last week announced a string of drive-in shows, beginning in September. Performing as Marcus King Trio at outdoor venues up and down the Eastern United States. Dates and locations below.

MusiCares provides a safety net of critical assistance for music people in times of need. MusiCares' services and resources cover a wide range of financial, medical and personal emergencies, and each case is treated with integrity and confidentiality. MusiCares also focuses the resources and attention of the music industry on human service issues that directly influence the health and welfare of the music community.

Marcus King’s recent album El Dorado, is a contemporary exploration of southern R&B, country-soul, classic rock and blues and established the 24 year old phenom as one of the most soulful voices of his generation. With an arresting voice that featured as lead instrument, King’s vocal took centre stage alongside a genre bending blend of subtle acoustics, bright pedal steel, raucous electric guitars and blistering solos. The record landed critical acclaim including a debut performance on Jimmy Kimmel Live and features with NPR’s Weekend Edition, Fresh Air and Rolling Stone.