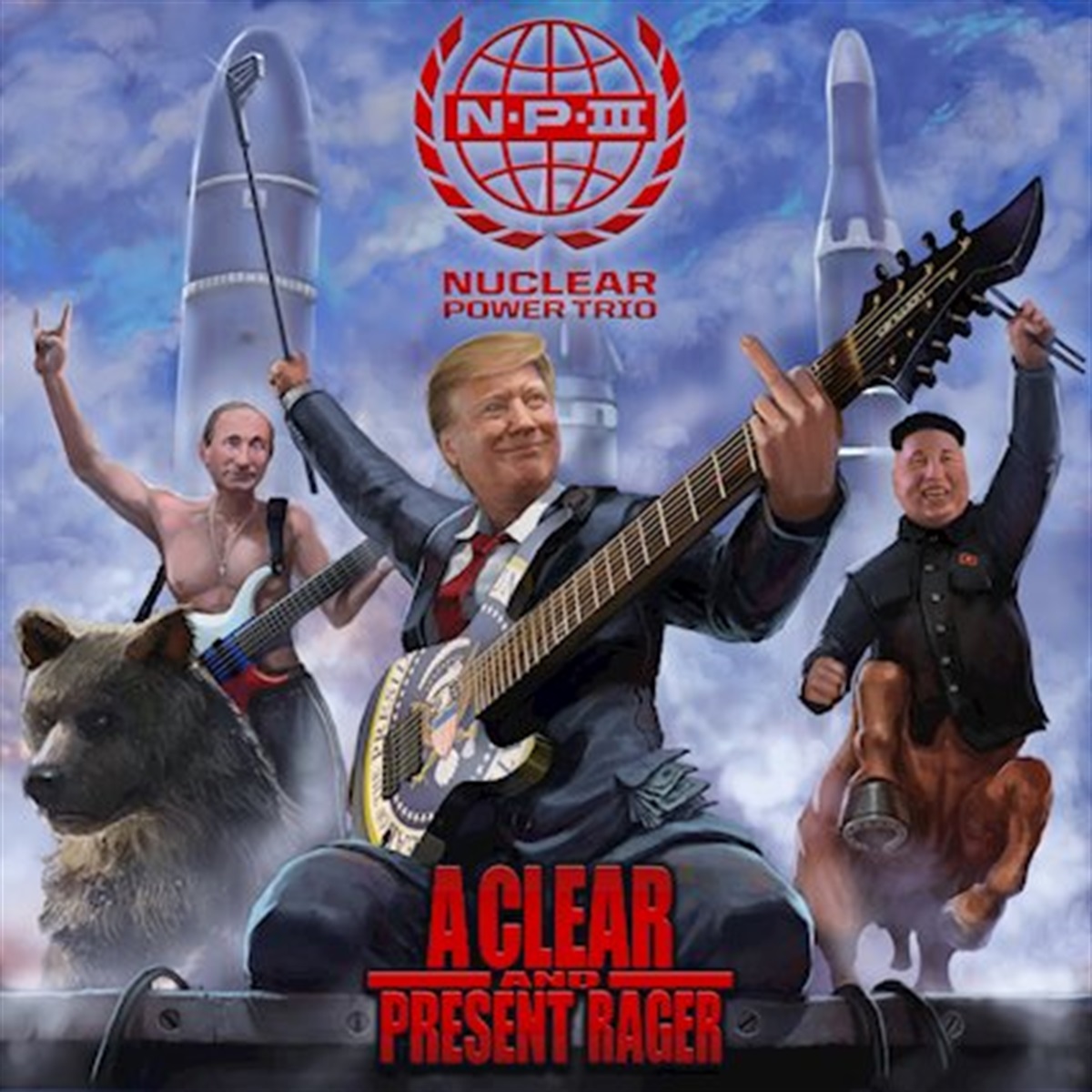 ‘A Clear and Present Rager’ is the debut EP from international supergroup, “Nuclear Power Trio”. An ambitious amalgam of progressive metal, Latin-inspired flamenco played on nylon string acoustic guitar, heavy funk, djent, and 80’s synthwave, this delicious 19 minute musical adventure is most aptly and succinctly described as “pure fun”. Evidenced in the two videos released thus for the title track, “A Clear and Present Rager”, and “Grab em by the Pyongyang”, the band has clearly established themselves as the party-bringers to the Latin Fu-Djent world scene. Donald Trump, Vladimir Putin, and Kim Jong Un are certainly uncommon names when discussing potential musical supergroups, but in keeping on the surreal path of the ever-distorting reality of 2020, they were destined to come together. The groundwork for several songs emerged from a single session, with cabinet members who heard the demos remarking that after listening they felt immediately more centered and ready to navigate the world. Donny, Vlad, and Kimmy's efficiency working together spoke volumes to the value of utilizing a musical platform in place of a political one to invoke real change. A Clear and Present Rager was recorded in Denver, Colorado by Dave Otero at Flatline Audio. Kim stated this about the process.  “I have very little tolerance for anything but supreme efficiency and a perfect recording when it comes to producers, so it can’t be understated how important it was to choose an appropriate match for this most prestigious collection of songs. Dave not only has excellent preamps, but he is swift and cunning with his suggestions for creating a product where everything is clear, audible, and crushing.” When asked about the group's audacious goal of peace through music, Vlad said, "We want to sow seeds of bipartisanship, of compassion, and of empathy through our music,” to which Donny added, “I completely agree with Vlad, we have to unite the left and right hand of our world into a handshake. You know you’ve got great hands in the world, so many hands…the best hands from all over the planet. We’ve got to get them in the air throwing horns at us at a festival, not throwing fists at each other. Nobody else can do that but us, and they’ve tried, believe me.” Kimmy concurred with the groups sentiments after a lengthy digression expressing his desire to “hang with famous basketball players”. The EP's October release was set immediately before the United States presidential elections, a timely moment that catalyzed a bold and conscientious path towards world peace. The EP has been incredibly well received, collecting high praise from literally every review, with most reviewers noting the incredible musicianship that keeps viewers and listeners around after the initial draw of the absurdity of the potential of a supergroup with such infamous characters. The group is in the process of filming 3 more music videos with director K. Hunter Lamar at Digital Myle studios, to be released in late 2020/early 2021. The band also recently signed with Sound Talent Group for booking in North and South America, and Australia; with Atonal handling booking in the UK, Europe, Asia, and the rest of the globe. With plans to hit festival circuits (Covid-Permitting) next year, the band is currently writing the full length follow up to their debut EP with recording to commence in fall 2021. Band Line-Up: Kimmy: Supreme Drums Donny: Tremendous Guitars Vlad: KGBass CD Track Listing: 1. A Clear and Present Rager 2. Grab em by the Pyongyang 3. The Fusion Collusion 4. Ukraine in the Membrane 5. Mutually Assured Seduction