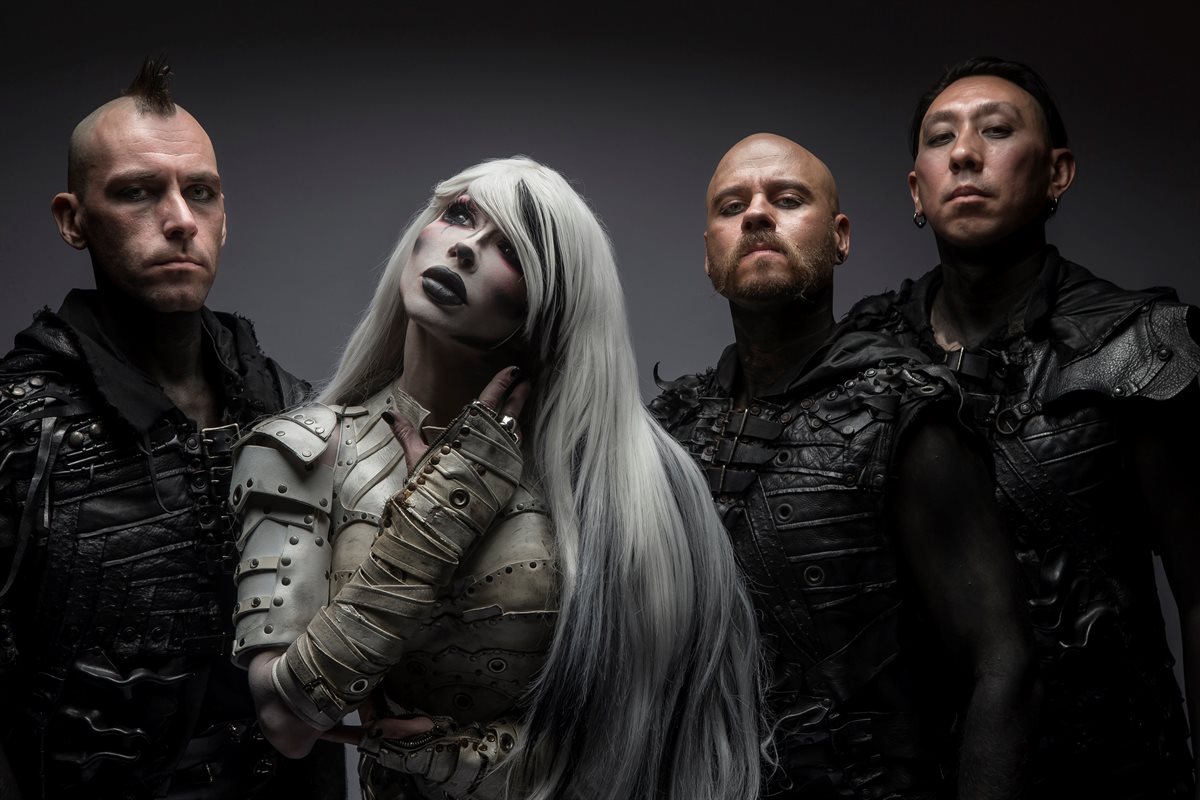 The female-led heavy metal band from Los Angeles, September Mourning, goes out of its way in originality and concept with music, costuming, and comic books. Yes, comic books. Emily Lazar, aka September, has designed a unique graphic novel that is brought to life in their live concerts, with characters September (Emily), Riven (Rich Juzwick), Wraith (Patrick Romanelli) and Stitch (Kyle Mayer). As a metal band, they are making waves in the industry with September leading the cast of characters through a maze of festivals, while introducing their heavy sound to new fans. However, they are not unfamiliar to some audiences, as they are often found in comic cons and anime festivals.

Independent Music Guide had a chance to talk with Emily about her perspective on her specially crafted Universe, new music, and how identifying as a long time gamer helped to forge their future in their varied arenas.

IMG: Please tell us about the development of the September Mourning Universe. There seems to be an old video game vibe to some of it.

September: So, basically it started as a trans-media project around a storyline. A lot of times it happens more in movies and television versus music. Nobody has really tried to do that in music yet. It has a monetary value. For instance, KISS - GENE Simmons took KISS and marketed the crap out of it with merchandising but not really with a storyline. September Mourning is based around the characters and storyline. You know, it’s a unique project like that and had not been done before. I have a background with comic books starting down in my parents’ basement. I was reading The Killing Joke, Batman, and got hooked. I just love storytelling. It became a thing for me to develop something more than just a band. Streaming, the development of the internet - now you can be beyond four walls. You can reach out beyond that. You have different sources of media, so I wanted to take full advantage of how we  tell our story.

As far as video game themed for "Hiding From Heaven" that we released, that was just an idea I had. Claire is blind in the books, but she can see death and reapers. We took Claire into an arcade, where she cannot see,  but she can see the Reaper in the game. Having her and the Reaper seeing each other in the game like that is cool, and I love Mortal Kombat and Street Fighter. We brought that idea into a music video.


IMG: How has it translated with your younger audiences?

September: They love it. I think that a lot of gamers especially get it, because Mortal Kombat is so iconic, especially with PS4 gamers. They know the old games, and it has also translated to the new games. It’s a nod to where everything started. I’m a gamer, and there are other gamers in my band. We are all part of that nerd culture.

IMG: I bet your anime convention performances are a lot of fun! How do they differ from your traditional rock shows?

September: I mean, if you watch Unholy video, you can see that we took a lot of footage from Anime Midwest and put it into film. When you perform, for me anyway, the performance is largely based on the energy from the crowd. It’s a very symbiotic relationship. You live and die from the energy from the audience. At the anime conventions, there is such a desire for something different, and the minute we step onstage, there is already electricity. It takes a minute to build the energy in a traditional rock stage. At a convention, you get hit with a wave of an aura of energy. It’s really cool. That whole crowd and scene is so accepting and so...You know, they want something outside the box. They want something different. Mainstream rock is like,”Oh they’re wearing costumes.” You never get that at conventions. If you bring them a character and storyline, they love it.

IMG: When you were creating music for your characters, did you mean to emulate the sound of video games? Some of the songs seem inspired by familiar background music fro popular games.

September: We didn’t go out to re-write Tetris, or anything like that. We didn’t mean to borrow sound from video games. Our programmer is very in tune with what we want to be and our Universe. It naturally has the sounds. Our universe is nerd core and gaming, so we speak in that Universe. We plant our flag there!

IMG: You have been working on a new album. When is it coming out, and where should people find it?

September: We have an EP coming out, we just released a new single “Hiding from Heaven” and released the video to go along with it. When we set out to make a video for 'Hiding From Heaven,' we strived for a visual presentation that would represent the project in a creative manner. September Mourning is a trans-media project, meaning its concept is forged by a storyline that permeates throughout different mediums of art. One of those is the comic book aspect, whose storyline is a combative tale of life versus death. We took that idea and expanded the universe through animation. You'll be able to buy the album at Apple Music, I-tunes, Amazon, any streaming services when it drops in December.

IMG: What’s next for September in the comics?

September: We are developing a second story line to continue where we left off, and that’s exciting. I’ve been working with Mark Sylvestri at Image, who works at Image.  Mark is my business partner for September Mourning. When I went to Mark to get him on board, he jumped on board. Image isn’t going to take away my creation, but rather help to make it bigger. I’m very grateful that he believed in me. The first graphic novel dropped this year, 4 books in 1. You can purchase them at any of the comic book stores, or even Target.

IMG: Can people buy a piece of September, meaning specialty merch items? Fandom articles? How and where?

September: We have so much stuff, drum heads, graphic novels, t shirts, wristbands, necklaces. My costumes are crazy expensive, costing in the thousands. Once in a while though, we will sell a wig or two. So, be on the lookout for those.