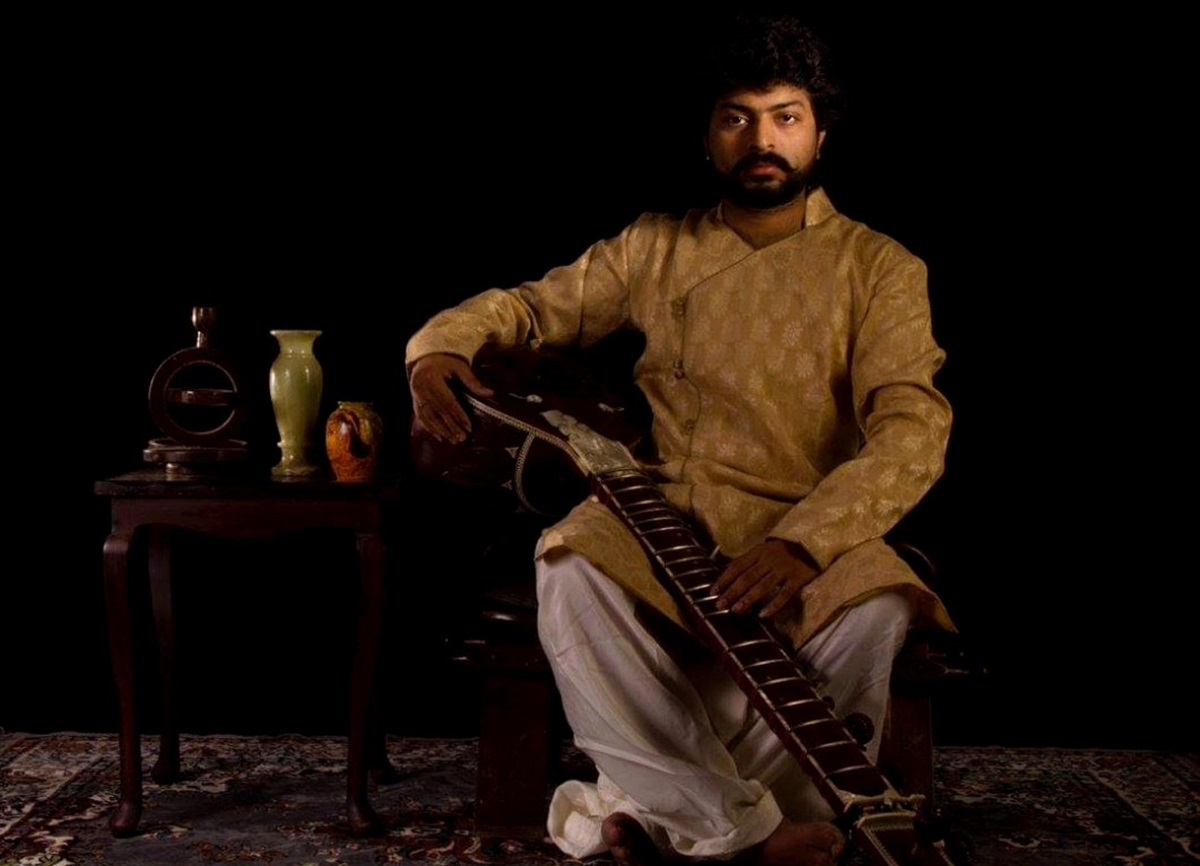 When we think of Indian music in the West, much like with Jazz, for many its complexity tends to shut off our minds. But, as with our special guest Sarang V. when it's fused with Contemporary, Electro, Psychedelic and Classical elements it adds a whole new fresh and fun,  highly energetic, yet sophisticated vibe to it.

So, lets dive in! Sarang, as we know the Sitar music influence in the west, George Harrison really brought the sound in to the Pop scene with the giant Sitar master Ravi Shankar.
In India where did you get your influeces from? Was he one of them?

As u say, it’s true that Pandit Ravi Shankar bought sitar into the global forum but being a disciple of world renowned sitar Player and my Guru (mentor) pandit Ravi Chary who with his classical attachment and fusion genre like "Ravi Chary crossing" (GIMA nominated album) is a huge inspiration for me. I feel my music which is an amalgamation of classical and fusion is a reflection of my Guru (mentor) Ravi Ji’s work.

How were you and the nation effected by Ravi's death?

To me Legend’s are immortal. They never die...Ravi Shankar Ji has left a magnanimous wealth of music for many generations to get inspired and learn his style of playing. He will always be an epitome of inspiration for all even in his death.

Our mutual artist friend Prathamesh told me about your new single "Eternal Voyage" and it instantly captured me. I turned up the volume and just blew me away with great energy.

Yes, I have very recently produced a music video for it. The music is an original composition of mine. The music is young and vibrant because of various psychedelic, electronic sounds and also a mix of jazz and classical at its base. The sound is inspired by my over the years of listening to my various idols both National and international. I hope to create more of such new genres with the blessings and inspiration of my Idols. The sound of which reverberate in the stage of contemporary, world music and reaches out globally.

As an Indian musician, Sitarist, composer, producer and performer in Mumbai, are there any current artists out there that inspire you?

As a Sitarist I am very much influenced by Ustad Shahid Parvez, beside Pandit Ravi chary. And as Ravi ji himself is Ustad Ji's most senior deciple that makes me too connected to ustad ji’s lineage of students. Besides these Sitar legends I have a huge admiration towards the respected and revered Ustad Zakhir Hussain and Trilok Gurtu Apart from these I have a great adulation for Louis Banks, Ranjit Barot, L Shankar and of course A R Rahman ji. I listen to them for the magic they create relentlessly. In Global arena I am influenced by legends like Joe Zawinul, Chick Corea, John McLaughlin and Marcus Miller. I try my best to bring in freshness in my music by listening to all these great names.

Oh, you mention my favorites guitarist John McLaughlin and percussionist Trilok Gurtu.  When they play with Kai Eckhart.. now, thAts hard to beat as a trio and as devoters to their journey, passion and art. How would you say you see yourself as an artist?

Art or being an artist is not a mode of entertainment for me. To me art is a global language of communication. Music transcends the limit of only being a composed sound, it’s in the feel and the effect that it creates inside the one who listens to it. Hence I am open to every kind of musical language so that my music does not restrict itself to any one kind of genre.

How do you personally want to be seen as an artist?

As I mentioned earlier, I don’t want to be seen as an artist limited to any one particular style of music. My music should be able to penetrate deep within the audience and create a feeling within which lingers inside for a long duration even post my performance.

What are some of the struggles you face there socially and professionally?

I don’t agree to the term “struggle”. Because it’s always a continuous process of learning. If you think a phase is a struggle phase and wait for it to pass you are actually waiting for the time when your learning ends.
So for me it’s a continuous process of learning. Although I would love to be “successful” but I wouldn’t stop struggling till the end, because if I stop struggling I stop learning.

Is the drug scene a big problem in the city of Mumbai?

I don’t think that it’s a social problem. It depends on the individual as to what his/ her priority of life is.

What kind of music career would you like to have in the future?

It’s like asking me that how many breaths I would like to have in my life. Music is the lifeline of my life. If I live according to norm and take good care of my lifeline I am sure it would shine and standout proudly with me.
It’s like nurturing a tree.. The more you love it and take care of it, it too will give you the fruits of success. And there’s no short cut to it.

My wife bought me a Sitar when she was in India last year. Our mutual friend Prathamesh gave my wife a Mijrab to give to me, that's a metal Sitar plectrum that wraps around your finger. But it's gone. I think my dog ate it! Can you please send me one?

Ohhh.. Hahahaha.. Same  thing happened with my student too.. Her dog ate her mijrab.. and yes, haha I'll definitely send you a few!

Haha, okay. Thank you. Sarang, thank you so much for taking time out of your busy schedule to be here with us today..

The pleasure is all mine, Thank you so much Tommy & "Independent Music Guide" for having me, too.. & Thank you Prathamesh for referring me. Regards!